February 18 marks the 271st birthday of Alesandro Volta.
Here is a short biography of his life and work.

The discovery of a natural source of electricity by Benjamin Franklin in 1742 was followed by a century of investigation as to its nature and uses. The names of several early experimenters were given the properties and measurements they discovered — the Italians, Luigi Galvani and Count Alessando Volta; Frenchman Andre Marie Ampere; German Georg Simon Ohm; and American Joseph Henry. Those within the elevator industry often unconsciously use the names of these pioneers when speaking of electrical applications and measurements – –  galvanic, volt, ampere, ohm and henry.

Alessandro Volta was an Italian physicist, known for his pioneering work in electricity. Volta was born in Como and educated in the public schools there. In 1774, he became professor of physics at the Royal School in Como, and, in the following year, he devised the electrophorus, an instrument that produced charges of static electricity. In 1776 and 1777, he applied himself to chemistry, studying atmospheric electricity and devising experiments such as the ignition of gases by an electric spark in a closed vessel. In 1779, he became professor of physics at the University of Pavia, a chair he occupied for 25 years. By 1800 he had developed the so-called voltaic pile, a forerunner of the electric battery, which produced a steady stream of electricity. In honor of his work in the field of electricity, Napoleon made him a count in 1801. The electrical unit known as the “Volt” was named in his honor. 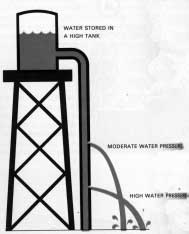 The Force of Current
In honor of Alessandro Volta, who sometimes judged a battery by the flash he saw as he touched its wires to his eyelids, electric force is now measured in volts. Voltage is a measure of the electrical “pressure” with which current flows through a wire. This potential is akin to that of water stored in a high tank, ready to pour down through a pipe. The farther water drops down a pipe, the greater will be the pressure of its spurt from a spigot. Similarly, the greater the voltage of a battery, the greater will be the force of current produced.