January 20 is Andre-Marie Ampere’s 241st birthday. Here is a short biography of his life and the work he was involved in from the Elevator Museum.

Despite not attending school, Andre-Marie Ampere was to be given an excellent education. It has been claimed that Ampere had mastered all known mathematics by the age of twelve years but this seems somewhat of an exaggeration since, by Ampere’s own account, he did not start to read elementary mathematics books until he was 13 years old.
In 1797 Ampere earned a living tutoring mathematics until 1802 when he was appointed professor of physics and chemistry at Bourg Ecole Centrale. He was appointed professor of mathematics at the Ecole Polytechnique in 1809, where he held posts until 1828. Ampere was appointed to chair at Universite de France in 1826 which he held until his death. Although a mathematics professor, his interests included, in addition to mathematics, metaphysics, physics and chemistry. Ampere was also making significant contributions to chemistry.

Ampere also worked on the theory of light, publishing on refraction of light in 1815. By 1816 he was a strong advocate of a wave theory of light, agreeing with Fresnel and opposed to Biot and Laplace who advocated a corpuscular theory. In the early 1820’s, Ampere attempted to give a combined theory of electricity and magnetism after hearing about experimental results by Danish physicist Hans Christian Orsted. Ampere formulated a circuit force law and treated magnetism by postulating small closed circuits inside the magnetised substance.
Ampere demonstrated various magnetic / electrical effects to the Academy over the next weeks and he had discovered electrodynamical forces between linear wires before the end of September. He spoke on his law of addition of electrodynamical forces at the Academy on November 6, 1820 and on the symmetry principle in the following month.
Ampere’s most important publication on electricity and magnetism was also published in 1826. It is called Memoir on the Mathematical Theory of Electrodynamic Phenomena, Uniquely Deduced from Experience and contained a mathematical derivation of the electrodynamic force law and describes four experiments.

The Steam of Current 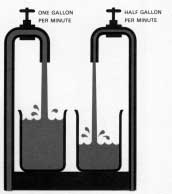 Andre Marie Ampere, who has been called the Newton of electricity, was the first to describe current as the flow of electricity along a wire. This flow is analogous to the surge of water through a pipe. The diagram shows two pipes, one twice the width of the other: in a given time, twice as much water comes from the wider pipe. Just as the rate of water flow is measured in gallons-per-second, current is measured in coulombs-per-second, a coulomb being a unit of electrical quantity.

For more information on inventors critical to the vertical transportation industry, visit the Elevator Museum at www.theelevatormuseum.org.